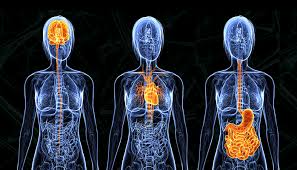 Working with the “gut” takes practice. I’m not talking about – erm – movements – although they’re important, too – rather I’m talking about how the gut responds to triggers in my day. My gut has been talking to me in some surprising ways lately. I didn’t always pay attention, but I am now.

There is a fair bit of research available about a relatively new hypothesis which discusses the “three brains’ theory”. It suggests we humans can, and actually should consider not just our head (logic), but our hearts (passion), and guts (intuition) when observing and engaging with life. As somebody who has struggled with conventionality, and mostly lived by the signals of her emotional body, this scientific push is refreshing, not to mention, load shifting. It tells me I am not the complete freak I sometimes think I am, but rather, someone who is trying to adhere to a different guidance system than what is traditionally considered proper. And furthermore, someone who had it right without knowing it.

Of course, knowing I “had it right” is cool but it’s not the be all and end all. There is a lot of un-learning to do and mainly, I need to figure out how to get out of my own way. I might have understood my body and my emotions were trying to communicate with me, but I didn’t speak their language for most of my life. Thankfully, I’ve been studying and am able to translate quite adeptly now. I don’t always follow their directions, though, which is what I mean about getting out of my own way.

Your instincts don’t let you down. I have heard this statement debated by people who have said they ended up in a mess when they followed their heart or went with the flow, but I’d argue they’re missing a finer point in the big picture. I’d suggest they got exactly what they expected rather than what they wanted and that their intuition was showing them that.

The laws of push and pull which creates resistance are absolute. As long as I push, there will be a push back. And, as with all science or physics if you will, there is no judgement. An equal and opposite reaction occurs whether you’re Mother Teresa or Genghis Khan. It is the basis of the oh-so-popular law of attraction. How do I attract? By letting go of resistance to something I want.

I’m working on believing, despite a lot of voices telling me otherwise, that I can survive and thrive in this city. I have two choices. Listen to the disparaging voices, or to my own. I’m choosing the latter and feel great when I do. I consciously cast off negative discourse and zero in on what I really want. It’s then that I feel my gut relaxing, my heart opening, and any troubles in my mind, dissolving. In this state, I found a job. My gut is happy this time, there are no knots, which is as it should be.

It’s not quite as simple as I make it out to be. Meditation and inner reflection are required. And I have lots of wild days and restless nights filled with doubt. How dare I think I can do things my way? Who am I? Surely other people know better! But, do they? No. I don’t think so. No one knows what’s best for me and my gut. Only I can really know what keeps me happy and healthy.

My wish tonight is for deaf ears. Odd wish, isn’t it? Yes, but there is a reason. If we stop listening to the noise, to the angry, hate-filled rhetoric so easily found, we can begin to feel a calmness in our bellies. If the voice is your own, tune it out, too! Hear nothing until you feel only calm filling you up. Then, gradually, you can listen again. What you hear will be different. The new words will not twist the gut into knots. They will bring advice that makes you feel like hearing once more.

But poetry, beauty, romance, love, these are what we stay alive for

Aging is an extraordinary process, where you become free to be the person you always should have been - David Bowie.

The Art Or Endeavour Of Being Lucid In A World We Live In... Secrets Of The Psychics... Energy, Universe, Futurism, Film, Empowerment...Digital Abstract Art Rendering...

Blurring the lines between poetry and prose

The Art of Blogging

Want to learn the simple way?

Always learn from the curiosity within and around myself.